This post has been published by me as a part of the Blog-a-Ton 21; the twenty-first edition of the online marathon of Bloggers; where we decide and we write. To be part of the next edition, visit and start following Blog-a-Ton.

There is something enigmatically captivating about an exact date. You know where to stop the wheel of time.
, : 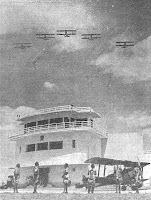 By the morning hours, 1st Armoured regiment of the Indian army entered Bidar. Tanks and heavy armoured vehicles rolled into the state. Meanwhile, the Indian forces had taken Zahirabad, Latur, Jalna and Osmanabad. Commanding officer Maj. Gen. Joyanto Nath Chaudhuri was tasked with capturing the city of . 3/11 Gurkha Rifles and a squadron of 6th Cavalry attacked the towns from the eastern side. At the town of Aurangabad, air strikes by Hawker Tempest Aircrafts which took off from the Poona Air Base, cleared most of the Hyderabadi defences. A civilian car was also hit on the highway. The Assault force from the west side was slowed down by anti-tank ditch and later came under heavy fire from 5th Lancer brigade of Maj. Gen. El Edroos of forces. Later during the day, 6th Golconda Battalion gave a token resistance to the Indian forces before surrendering. Naldurg fort on the Solapur-Hyderabad highway was now under the command of Punjab Infantry Unit. The Razakars adding a force of 2,00,000 rebels to Gen. El Edroos’s army suffered heavy casualties in the week-long war with the Indian Army. The rebellion was crushed. Over 1000 Razakars killed, 3500 captured. The Nizam’s defeat was now imminent. 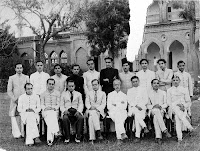 2 Years and 3 Months Earlier, , :
A crowd of about 200 ecstatic students cheered Noor Jah Bahadur as he recited his Urdu poetry on the dais. His friends clapped and whistled as he meted out one prose after another. It was the culmination of their Graduation ceremony. Young and handsome Noor in his sherwani was the life of all gatherings. His friends loved him and envied his lifestyle. His father Niyamath Jah Bahadur ran a successful transport business. His trucks brought imported goods from the ports of for the Royal family. On Noor’s 20th birthday his father gifted him a red Chevrolet Impala. Girls gaped at him. His witty and malicious poetry often filled the air with energy. Noor was happy but anxious today. Though the auditorium was studded with other pretty girls, Noor’s eyes kept fishing for Amina. She was the muse of his poetry. Last year during the formal introductions with the seniors Amina had captivated Noor’s heart. They were very good friends since then. And today after the party, Noor planned to ask her hand for marriage. After Noor bid goodbyes to his friends, at the huge dome shaped gates of , Noor offered Amina to drop her home. Amina blushed and looked at her friends as if for acknowledgement. They giggled and acceded. She covered her head with her dupatta. Noor held the door open for her and she got into the shining long beauty. Her friends oooh’ed! They drove around the beautiful city. The cool evening breeze carried the fragrance from the infinite flowers from the gardens and filled the streets with a magical aura. Noor’s heart was filled with love. They stopped by the Hussain Sagar lake. Noor could no longer hold back the words he always dreamt saying to Amina. He turned to Amina, gathered his courage and asked her permission to talk to her parents. She blushed and held her head down. The moon bathe them in a luscious aroma. Noor wanted to seal this perfect moment with a stellar display of his love for her. He held her face in his warm hands and drew her close to him. Amina closed her eyes as Noor felt his lips touched her petals which were made in heaven!
The wedding date was fixed as soon as Noor would return from after participating in a Mushaira. Three months later on they got married. The wedding was remembered by for many years to come. Soon they were blessed with a baby girl. They named her . She was sweetmess itself! Noor and Amina had every thing one would ever wish for. Every evening, Noor would take Amina and to the Safdar Bagh, a sprawling and huge garden near their home. He loved this place because his daughter loved to play with the ducks near the pond. Noor loved to watch her play. For him, it was the most soothing sight after the sight of Kaabah! would play till the mosque near the garden would call the believers for evening prayers. They came here everyday and watched play. There was never a day he missed.
:
Indian government, led by Sardar Patel was bent on flushing away the newly acquired state of its Rebels and the people who helped the Nizam Royal family. They feared that the millitia Razakars led by Qasim Razwi were re-grouping for a future war with . was now as an ulcer in the heart of . Surgical raids were being carried out on the suspected Razakars. Niyamath Jah Bahadur was alerted of a possible raid on their house very soon. He summoned Noor to take his family and leave for where they could stay with his uncle then return back to when the situation is back to normal. Noor wanted Amina to take little and leave immediately with a confidant and he would join them in a couple of days. But Amina and his daughter never reached . 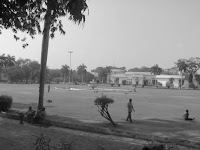 :
The other day, I was sitting on the bench by the canteen after an evening jog around the girth of Safdar Bagh. There was a small commotion near the tree by the pound. I went over to see what was happening. An old man leant motionless by the tree. I took a close look at his face. He had grey hair and a stubble on his face. His eyes, still open, left a deep trail down his wrinkled cheeks. He was thin and wore a dusty grey sherwani. Someone in the crowd sighed an Arabic verse. Another one mumbled how this old man would come every evening and sit for hours staring at the pond till the sun would fade away behind the trees. An old and dusty book lay beside him. I picked it up and turned the black cover. An old and ambiguous picture of what looked like a woman and a child was tugged between the brittle brown pages. I tried to read what was written on that page in urdu. It stated with-
, , ………
The fellow Blog-a-Tonics who took part in this Blog-a-Ton and links to their respective posts can be checked here. To be part of the next edition, visit and start following Blog-a-Ton.
Posted by Mudassir Abdullah at 2:47 AM 12 comments: